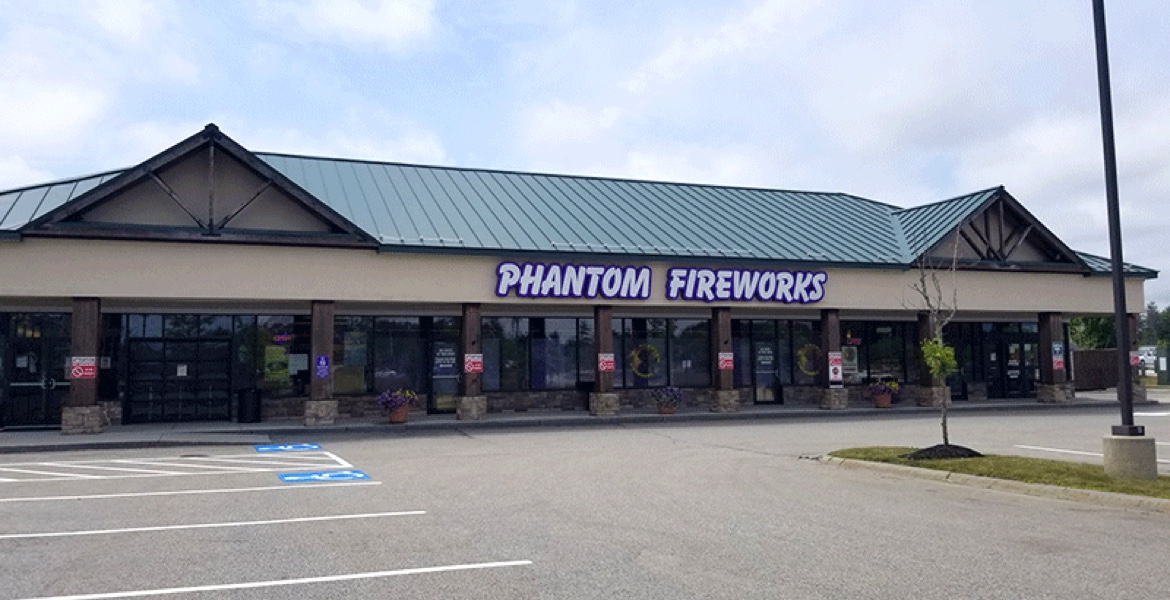 As Fireworks Store Moves In, Other Businesses Make Way

Southern Maine’s first fireworks store, set to open in June, has other retailers in Scarborough’s Gateway Shoppes literally moving out of the way.

Phantom Fireworks, a national chain, plans to open its first Maine store in a building that was home to a Haven’s Candies store and Thai 9 restaurant.

Those shops have closed and are moving elsewhere in the plaza, so the fireworks store can move in.

Existing shops believe the fireworks store will draw more foot traffic to the Payne Road plaza, while Phantom Fireworks hopes to benefit from being in a shopping center with Cabela’s, which attracts many of the same customers.

“This whole thing will be a plus for everyone,” said Harvey Rosenfeld, president of Scarborough Economic Development Corp.

Since the state law legalizing the sale and use of consumer fireworks took effect in January, two stores have opened — one in Manchester and one in Edgecomb.

Steve Marson, who owns the stores, both called Pyro City, said he plans to open another one in Winslow in May and two more, in Presque Isle and Ellsworth, within a couple of months.

Marson said he hasn’t had an interest in opening in southern Maine, because it’s too close to existing stores in New Hampshire and because many towns in the area have enacted ordinances banning the sale or use of fireworks.

Jack Abell, director of development for Phantom Fireworks, said the company is well poised to do business in the area because it is “familiar with the customers,” who already shop at its New Hampshire stores. Phantom, which is based in Ohio, has about 60 stores in 14 states.

By Maine law, customers need to be at least 21 years old to buy consumer fireworks, a classification of smaller explosives that include Roman candles and sparklers, according to the U.S. Consumer Product Safety Commission.

The State Fire Marshal’s Office lists missile-type rockets, sky rockets, bottle rockets and helicopters among the kinds of fireworks that are still illegal to sell in Maine.

Maine’s law also allows towns and cities to have their own regulations on fireworks.

Although the Scarborough Town Council, after much debate, decided to allow the sale of fireworks, it banned the use of them for all but five days of the year — around New Year’s and the Fourth of July.

Portland, South Portland and Biddeford are some area communities that have enacted bans on the sale and use of fireworks. Westbrook, Windham and Saco all have discussed the topic and decided to allow them.

While that was happening, at least a few fireworks companies were paying close attention, Rosenfeld said.

“Once the state law went into effect, there was a big interest in Maine. People were watching,” he said.

Rosenfeld said the companies looked at several sites in Scarborough. The proximity of the plaza to Interstate 95 made it “a really good spot,” he said.

Soon after Cabela’s and a handful of retail stores opened there in 2008, the recession hit and “kind of stopped our renting program in its tracks,” developer Barry Feldman said.

The Gateway Shoppes has the capacity for 220,000 square feet of store space. So far, about 185,000 square feet, most of which is Cabela’s, have been built, Feldman said.

With the fireworks store, 85 percent of the existing space will be occupied.

Feldman, owner of Feldco Development Corp., hopes the fireworks store is just the first of the new businesses to move into the plaza and enable the build-out to continue.

“We think the future is very bright,” he said.

Although Haven’s Candies owner Andy Charles said relocating the store is “a huge undertaking,” he believes it will be worth it to bring a new business into the plaza and to move closer to other retailers, including Portland Pie Co. and Cabela’s.

An arrangement with Feldco made the move “favorable” for both parties, Charles said, though neither he nor Feldman would divulge the details.

By state law, fireworks stores must be in stand-alone buildings.

Thai 9 and Haven’s will both be closed for about a month. They plan to reopen by the end of May.

“I’m excited,” Charles said. “Whether you agree or disagree with fireworks, … it brings traffic to the plaza.”